IoT (Internet of Things) is a big buzz word with real consequences for the future. People are enacting all kinds of IoT solutions, from intimate domestic space to massive industrial assets. Forecasters see IoT investments as a serious, impactful rising market. Combine IoT with water? You’ve got the planet’s single most important developing infrastructure.

Behind water’s IoT futures lies a hidden history. Let’s call this legacy EoT or Environment of Things.  Instead of implying the internet houses all the intelligence, EoT assumes the environment is our primary source of intelligence. EoT is the system of intelligence everywhere in our complex, interconnected, ecological resources — the intelligence of water, of the human body, of chemical cycles (oxygen, nitrogen, phosphorus), of electromagnetic waves. These scientific ‘things’ are our essential tools of knowledge. Those of us in environmental monitoring, especially water monitoring, have been preparing, working with, expanding and monitoring EoT networks since 1970’s, long before IoT networks of real-time data were even a thing.

Before smart water sensors there were not-so-smart humans. Humans are made of enormous amounts of water. Which makes our bodies pretty good sensors. We see our bodies responding negatively to bad things in water: with waterborne illnesses (think Flint, or ) causing sickness, cancers and death.

The inaugural modern outbreak that initiated the realization of the relationship between body health and water, began in the late 1970’s, with Love Canal. In short: toxic waste dumped into the canal contaminated a community, their soil, air and groundwater.  Outbreaks of cancer rose and correlations were made between pollution and human health. Public and private outcries raised awareness, and concluded with U.S. congressional action. Monitoring our environment was a response to human bodies displaying H20 info in the form of illness.

A monumental piece of legislation was enacted: Love Canal created Comprehensive Environmental Response, Compensation, and Liability Act (CERCLA), or the Superfund Act. Additionally, The Resource Conservation and Recovery Act (RCRA), was enacted in 1976 and the Clean Water Act was continued and strengthened. All of these initiated regulation and protection of water. Which on a deeper level is the protection of biological life: human, animal, plant.

Human body sensors are not very good early warning systems. Symptoms of toxic environmental conditions often show up way too late. After Love Canal regulations, people needed to figure out how to know in advance when something was wrong. How? Environmental scientists drilled hundreds of test wells around the most polluted tanks and waste locations, like Love Canal and Hanford Nuclear site, and other toxic landfills.  They discovered immense levels of contamination — TCE, benzene, dioxins — through sampling from these wells. Basically scientists hacked into water and discovered how to decode what was there. 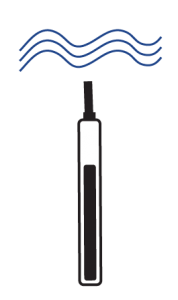 As we began to learn more about our groundwater, we also began to track surface water, water runoff, and the integrated flow of water throughout air, soil, ocean, food.  Companies began creating submersible sensors that were cheap, durable and modular. With submersible sensors, one could get water data through meters, or an on-site recording device (instead of samples sent to labs).

So what happened? Tracking information about bodies of water more quickly, with more durable sensors, allowed us to make smarter decisions. We began to anticipate and prevent water problems by understanding them in the context of the greater system. Example: Knowing river levels upstream determined how much water could safely be pumped through water treatment plants, how much to store in reservoirs.

At that time, scientists and engineers began to realize, if all the data from these submersible sensors could be connected, we would be able to respond to the intelligence hidden in earth’s resources with greater accuracy and affect.

Water networks monitored by wells made complex data accessible: the EoT began to transform into the IoT. Submersible sensors became modular digital sensors, with rapid advances in cheaper circuit technology. These sensors are known today as data loggers: the ‘things’ part of IoT. People began to try to figure out how to get all the data to a single place: the ‘internet’ part of IoT.

Early solutions in place of internet were dial-up modems and radio tech. Think AOL. Early integrated systems got data back to a central point, but was slow and made a lot of annoying noise. 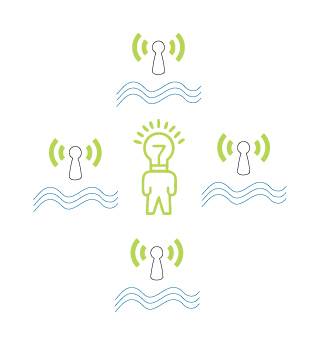 With digital sensors submersed in our water supplies and piping data back to a central hub, we can track the greater changes in our planet’s environment. Wait. Really?

How is it that even with interconnected smart sensors, logging and piping data, the underlying Environment of Things (rivers, aquifers, rain, streams, etc. etc.) that actually store our essential data is still taken advantage of with negative consequences for human communities (Flint? Dakota Pipeline? all of CA?)? We have an enormous built-in advanced intelligent infrastructure that we developed. Yet we haven’t quite translated fully into sustainable investment wisdom?

Step up to the plate, IoT! Can IoT can provide a solid, reliable secondary infrastructure, we can learn to share, understand and utilize the data our EoT always has available? That is the deeper plan. We want to build a better planet; a better relationship to the planet.

It’s already happening. With rapid advance of tech, sensors are getting better, smarter. Telemetry systems (Wifi, satellite, cell) are able to create more complicated robust, analytical data sets shared with a wider audience. The USGS and others create open source, real-time data from these sets, so that scientists and other wizards can start to better understand the problems we face. We also have secure, responsive mini-networks — the muse of IoT — that connect together, keeping information modular (Bluetooth, LoRa, Sigfox, etc.).

Like most history lessons, it’s easy to see in hindsight our advances are carefully scaffolded on elemental, basic technology provided by earth’s resources. We still need communities of people, using sensitive sensors, maintaining infrastructure that give them constant access to all the water, and intelligence that tells us how to understand the data we collect. Will IoT systems get us to move from listening to conversing with the system we’re integrally bootstrapped on? We’re on the way to finding out.

Heidi Gustafson is lead project manager and director of research at Anuraco.  She can be reached at heidi@nullanuraco.com.

Innovative IoT Tech in the Water Space: a 2016 WEFTEC review